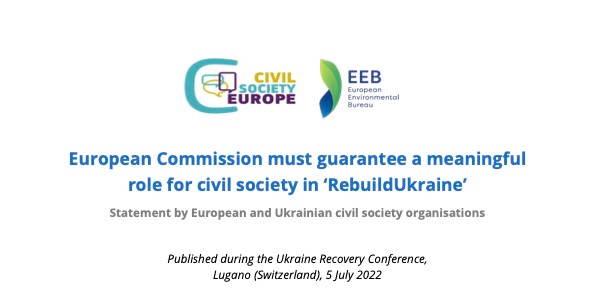 Civil society organisations in Ukraine have been playing a crucial role since the start of the full-scale Russian invasion and escalation in February 2022. They have been central in providing humanitarian and medical assistance, helping those fleeing the country, documenting atrocities and war crimes, reporting environmental and cultural heritage destruction, as well as organising the spread of independent information and access to vital services.

Ukrainian civil society organisations and some of the European networks have already pointed in an open letter to the European Commission that the success ‘RebuildUkraine’ is fully dependent on its real ownership by the Ukrainian people. A close involvement of non-governmental organisations, both on the EU and Ukrainian sides, will help increase the transparency and accountability of how EU public funds are distributed and spent. European and Ukrainian civil society are ready to share their experience and to channel the voices of those active on the ground to contribute to the rapid reconstruction of Ukraine and to a bright future for a strong, democratic, resilient, equitable and sustainable Ukraine within the EU.

Copyright 2022 Ambrela - Platform for Development Organisations. This site is funded by the EU and SlovakAid. Ambrela is solely responsible for its content and does not necessarily reflect the views of the EU.

This website uses cookies to improve your experience while you navigate through the website. Out of these, the cookies that are categorized as necessary are stored on your browser as they are essential for the working of basic functionalities of the website. We also use third-party cookies that help us analyze and understand how you use this website. These cookies will be stored in your browser only with your consent. You also have the option to opt-out of these cookies. But opting out of some of these cookies may affect your browsing experience.
Necessary Vždy zapnuté
Necessary cookies are absolutely essential for the website to function properly. This category only includes cookies that ensures basic functionalities and security features of the website. These cookies do not store any personal information.
Non-necessary
Any cookies that may not be particularly necessary for the website to function and is used specifically to collect user personal data via analytics, ads, other embedded contents are termed as non-necessary cookies. It is mandatory to procure user consent prior to running these cookies on your website.
ULOŽIŤ A PRIJAŤ